Some time ago, I decided to establish a photo album of forest pathologists and forest entomologists.. that is people that do research or  have some interst in diseases (pathology) or insect pests (entomologists) that affect the health of trees.  If you are interested, you can see the initial posting of this album on the FABI web site (www.fabinet.up.ac.za) by going to HOSTED SITES and scrolling down to the album of forest pathologists and forest entomologists.

When we released the first draft (quite incomplete) of this web based album (we used a very neat and free web-based  programme called jalbum -check it out), the response from tree health specialists around the world was quite interesting.  And I think some of their views said a great deal about the field.  Firstly, the fields of forest pathology and forest entomology overlap very markedly.  There are many entomologists that work with pathogens or the interaction between pathogens and insects.  Equally, many pathologists work on insects and their relationships with pathogens… I could go on and on.  Many of us, I am certainly one, do not conider ourselves strictly belonging in one camp and have spent much of our careers working on both insects and pathogens of importance to the health of the world’s forests and plantations.

But let me get back to the issue of the album.. .when we released this to our community, I was very interested to see comments by colleagues that work on the effects of climate change and air pollution on tree health.  They felt strongly that this album should incorporate them too.  And so it should and will in the future! A keen example of the importance of climate change on the health of trees is found in the terrible losses that are being caused by the mountain pine beetle in the North America.  There is little doubt that climate change has strongly driven the emergence of these dramatic deaths of trees.  Allowing insect populations to build up above normal levels and to be able to kill large numbers of trees.  And lets not forget the pathogens (in this case fungi) that are involved.  This particular insect carries a suite of fungi but one in particular that lives in a symbiosis with the insect… whether it plays a role in killing the trees is another matter. One that some of us debate about very actively.  That I might write about on another occasion.

Finally – the study of tree health includes many disciplines and most specifically entomologists, pathologists and climate change/ air pollution specialists.  It is thus fitting that in the largest association of researchers working in the field of forestry is the International Union of Forestry Research Organisations (IUFRO).. visit www.iufro.org, forest diseases, forest insects and climate change/air pollution are dealt with in one of the eight major divisions. 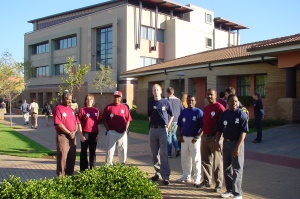 Since establishing my TREEDOCTOR blog, a few days back, a few folk that have taken a look, have asked where I come from and why I have an interst in the health of trees.  Although this is  not perhaps the intended aim of the blog,  let me post a bit of background.

I suppose a call myself a biologist, but my main education has specialised education has been in the fields of Plant Pathology (the study of plant disease) and entomology (insects).  I have spent most of my career studying insect pest and diseases problems of trees.  My base is in South Africa but I have had the  privilege of being able to work in many countries of the world (North, South and Central America), Africa,  Europe and Australasia.  I have thus been able to see trees and tree diseases in some of the most incredible parts of the world and as I build this blog, I will share thoughts and images from these experiences.

But let me get back to my home base.   For the last twelve years,  I have been the director of the most amazing institute known as FABI (Forestry and Agricultural Biotechnology Institute) based at the University of Pretoria.  If you are interested, visit the FABI Web Site at (www.fabinet.up.ac.za). As you will see, FABI covers fields far beyond that concerning tree diseases.  But there are some large key projects that deal with tree health – the Tree Protection Co-operative Programme (TPCP) and the Department of Science and Technogy/ National Research Foundation Centre of Excellence in Tree Health Biotechnology (CTHB).

Welcome to my TREEDOCTOR blog.   This blog deals with the increasing threat to the world’s forests and tree plantations caused by insect pests and diseases caused by microbes.  This might be a field that is new to you, or you could be a specialist that knows as much (or more) as I do regarding the topic.  The upshot of the matter is that pests and pathogens (the agents causing disease) present one of the most serious threats to trees around the world.  This is due largely to these agents being moved accidentally by humans and the products of our trade, to new environments.  But the story is more complicated than this.  Pests and pathogens are adapting to new environments, there is evidence that some are hybridizing to new and more devastating forms, and there is good evidence that global climate change is resulting in new and unexpected disease problems.

The aim of this blog is to share knowlege regarding pests and pathogens of trees as I move around the world to study them.  There will be no particular shedule to post the blogs and the contents will range from quite specific and formal to general “musings” regarding the topic.  The opinions presented will be my own and they will not necessarily be the same as those of other tree disease specialists.  But your thoughts and opinions will be of interest.